The success and continued growth of the Irish construction industry empowered construction professionals, particularly those savvy enough to pick and choose from a plethora of employment opportunities.

On the other hand, employers are feeling the pinch of a talent shortage, requiring them to be more creative and agile when it comes to both employee attraction and retention, says Stephen Hoban, Associate Director of our Construction, Property & Engineering team at Azon Recruitment.

An area that exemplifies the future of the industry talent-wise is health, safety, and environmental management. There are rapidly evolving roles in this field that will only rise in demand in the years ahead. For instance, the Government’s Climate Action Plan targets the retrofitting of 500,000 homes. This programme will require experienced environmental and fire safety professionals, as well as health and safety managers, to guide these works through to completion. Another growing trend to look for in 2020 is how mental health and wellness is being wrapped into the H&S function, requiring further qualifications or even evolving into an entirely new role.

Looking at the industry from a more general viewpoint, salaries continue to rise, but at a slower pace. On average, we saw a rise of about 4.5% in 2019 compared to 5% in 2018. There has been a move to focus more on improving overall packages as a way of differentiating and attracting talent. Standard items like car allowances, pensions and health benefits are being enhanced, along with relocation cost coverage, bonuses and other items.

Rapid career progression is another tactic employed to aid in employee attraction. I have seen new, senior hires being offered benefits such as potential profit sharing, and even a position on the company board if they meet immediate project targets. Not only is this a powerful recruiting tool, but it also acts as a performance incentive. It remains to be seen if organisations can sustain this level of “sweetener” during 2020.

The skills shortage remains consistent, with heavy competition for quantity surveyors, engineers, project managers and trades. While we have many large, flagship developments underway, smaller- scale development is consistent throughout the country, which again gives candidates greater choice in how and where they want to work.

This has been driven by the housing crisis, with demand for new builds nationwide and thus requiring talent nationwide. The ‘Catch 22’ problem that construction firms run into is the need to bring in new talent to build houses, but then they do not have existing housing stock for new hires. We have especially found difficulty when trying to relocate expats and international talent when they have seen the shortage of housing options and inflated rents and purchase prices. Hopefully, this will be a self-correcting problem over the next few years.

So, how are companies addressing skills shortages? The short term solution has been the relocation of professionals from abroad, either expats who left after the 2008 crash or those who might be interested in moving to Ireland for the first time. Thanks to an update to the Critical Skills List, securing visas has become easier. Employers should keep an eye on opportunities in this space. The other part of the solution is, of course, homegrown talent, through improved apprenticeship and graduate programmes. The CIF’s pre-budget 2020 submission highlighted several different opportunities in this area.

With long-term projects like ‘Building Ireland 2040’ and the Climate Action Plan, the industry will be a sustainable career for anyone looking to get involved, whether it’s increasing capacity, raising awareness, adding incentives,
or building a lasting pipeline of young professionals that will define the future of the industry.

As part of the ‘Azon Ireland Salary Guide 2020’, we spoke to Tom Parlon, Director General, CIF, and he said, “The changing face of construction is generating new job types, particularly in technologically driven roles. As a result, the industry is now competing in talent pools that other industries have traditionally dominated”

“In addition, we are now facing a gender equality crisis, that we must address to put our industry on a sustainable footing. The next generation of young employees are increasingly demanding diverse workplaces, where their work has a purpose and that features genuine collaboration. The evolving construction industry is well-placed to provide young people with rewarding, well paid and challenging careers that can see them work globally.”

A version of this article originally appeared in the January 2020 edition of the Construction magazine. 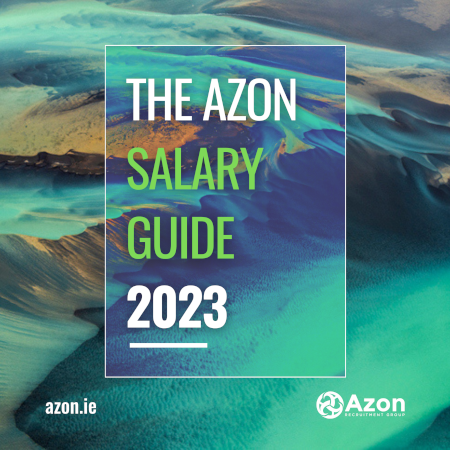 In an ever-changing employment market, the 2023 Salary Guide provides you with up-to-date insights about salary levels across all sectors. Whether you’re hiring, or looking for your next move, equip yourself with the latest data today.

Our CORE values are embedded deep in our company culture and inform all of our day-to-day dealings, with clients, candidates, vendors and each other. While we endeavour to live by…

There has never been more ways to collect, organise & analyse and use data. Being able to effectively utilize data to inform decision making is becoming a must have skill.…

Set up a consultation with a member of our expert team.

DOWNLOAD
Manage Cookie Consent
To provide the best experiences, we use technologies like cookies to store and/or access device information. Consenting to these technologies will allow us to process data such as browsing behavior or unique IDs on this site. Not consenting or withdrawing consent, may adversely affect certain features and functions.
Manage options Manage services Manage vendors Read more about these purposes
View preferences
{title} {title} {title}
×